This morning I had determined to get out and explore the island, regardless of the weather, and though the day started in fog, there was no rain, so I left the house and ascended the hill to the ridgeline east of town.   The mists disoriented me, and I lost all sense of direction on the marshy slopes.  I refused to consult my GPS or map.  I simply wanted to let the landscape unfold.  As I went higher and higher, and the visibility was more restricted to a white haze which surrounded me, I kept thinking about what I had read in the guidebook:

“As far as safety is concerned, the main risks are the Faroese landscapes— vertical sea cliffs that drop into the sea from heights up to 900 meters should obviously be approached with great care.”

Although the wind was quite strong, the fog was so thick that nothing could be seen in any direction.  I came across sheep staring at me in the mist like ghosts.  A flat waterway presented an optical illusion, as my depth perception was hindered by the fog and mist.  I thought that I was looking at the ocean far below and small islands, but the surface of the water was actually a just a few steps away from my feet.  I came across a cairn, which the guidebook also stated were protected archeological remains.  Just as I approached the cairn, my boot fell straight down about eight inches into a split in the turf, which startled me.  With the wind continually shifting the fog and filling my ears with a shushing sound, the mist spattering my camera lens and the limited visibility, the mood was quite eerie. At one point, I thought that I had crossed the apex of the ridge and was descending the other side, but as the fog lifted briefly, I could see Klaksvik beneath me.  If you click on the image below, you will be able to see a brief video I took which fortuitously captured the effect of the fog lift and then the fog cover again over the town. 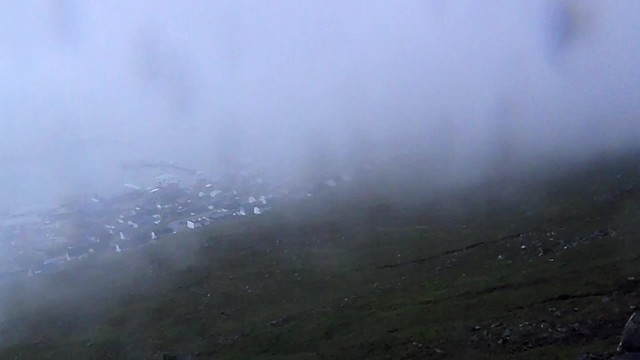 For more images of this strange landscape, as well as the rest of my Faroe Islands photographs and short videos, you can browse this page:  Faroe Islands Album.

Here is a map of the route of this hike.  You can see that I came back down the same side I went up, but at the time I thought I was descending the opposite side.

After about an hour and a half, I wandered down towards town and made my way along the main road to a bakery which had been recommended to me by the tourist office (its location is marked on the map above by the red pin).   It was quiet and there were only a few people inside, but as the fog was started to lift and sunshine was starting to clear away the clouds, I could see out into the northern waters, as the bakery was located on the northern coast of town.  After coffee and a pastry, I explored the northwest road out of town, which led to the only grove of trees which exists on the island.  It’s a small stand of spruce and alpine rose bushes which the local community has cultivated near a natural waterfall, as a beautification project, and it is enhanced throughout by footpaths and benches.  Just as I had completed the circuit of this quiet spot, the clouds really broke apart and bright sunshine poured down, inspiring me to go and fetch my bicycle from the guesthouse and take it out on the roads.

After a brief stop at the local bike shop to have my chain lubricated with oil, I started off, curious to see what bridges or tunnels I might find.  There is a young Dutch family staying in the same guesthouse with me, and the father had urged me before I left  to be careful in the tunnels.  “Some of them have no lights, some go up and some go down under the sea.”  Indeed.   I left Klaksvik and headed towards Kunoy, the island immediately to the west of Borðoy, and thought I might try my luck advancing through the tunnel.  If I had read my guidebook beforehand on this island, I would have realized that there would be little use trying to go in this direction.

“Much more than any of the other Faroe Islands, Kunoy consists entirely of a single ridge of mountains which runs down the spine of the island at a height of 700-830 meters; from the top of Kunoyarnakkur which forms the island’s northernmost point, it’s a sheer drop of 819 m to the sea below, making this not only the Faroe’s tallest sea cliff, but also one of the highest anywhere in the world.”

Not exactly cycling terrain. But you know, I don’t always read everything before I set off.  Nevertheless, I had in my head the snippet of a conversation from sometime last year, when out hiking with a friend and feeling disoriented, I had said to him, “I haven’t even looked at this place on a map.  I’m not sure which direction to go.”  He had replied, “Well, you’re here.  And in some ways, that’s better than looking at it on a map.”  I was full of curiosity, delighted with the fine weather, which was bringing out the colors and unveiling the landscape with every puff of wind, and I was willing to try braving the first tunnel that came my way in order to put some kilometers behind me on the islands.

I passed a cruise ship docked at a small harbor outside of Klaksvik, and cycled past it up the hill to a tunnel, which I thought would take perhaps 200 meters to get through.  I was wrong.  This was the Tunnel of Doom.  It was an unlighted tunnel, hardly 3 meters high and only a slight squeeze space between the road and the rock walls.  There was no walkway on either side for construction or repair workers. It had only one lane.  And it was very, very long.  It was the kind of tunnel in which the cars turn on their brights and barrel through, one at a time, in only one direction at a time, while the car on the other side waits for its turn to go through.  I had a front light, but it was growing dim with prolonged use, and I knew it wasn’t bright enough.  I had left my back light at home in my backpack.  And despite all these facts, I was idiot enough to attempt to pass through this tunnel.  It would have been more sensible to try and hitch a ride in a passing cargo van.   I made it halfway, and after surviving the fifth or sixth car which passed perhaps three feet from my body, feeling my mortality shiver and crumble a little more each time, knowing the innocent motorists had absolutely no idea I was pressed into the rock as they whooshed by, I ran.

I ran back the way I had come.  Ran with terror in pulsing my brain, flagellating myself for even having thought that it might have been possible.  Turning back every fourth second to watch for the oncoming headlights of an approaching car, expletives flooding my every thought, running back to the sunlight and the safety of the ordinary world.

Still determined to find some action on the road, I tried another route and crossed a stone bridge to the island of Kunoy and followed a road which dead-ended in the tiny village of Haraldssund.  The other direction of the road led to another tunnel, and I wasn’t keen on it.  There was also another tunnel leading in the opposite direction at the other end of Klaksvik, so I was trying to figure out where I might be able to cycle.  It didn’t really matter to me where I went, because I just wanted to enjoy the clearer skies and the landscape.  I approached a local of the village, told him I had come from Klaksvik and asked if there were any stretches of road which did not involve going through tunnels.  “No,”  he replied after a moment’s thought.  “There isn’t.  Did you come on the cruise ship with your bicycle?”

“But if you’re in Klaksvik, how did you come from Tórshavn?”

“Yes.  And I thought I could cycle around the islands a little.  But my lights are too dim for the tunnels.”

He laughed and agreed.  I bid him goodbye and headed back to Klaksvik.  Kinga, my host, had told me about a cyclist guest who had stayed with her who had put something like 600 kilometers behind him while in the Faroes.  And I knew that Alek and Oleg were certainly going to be able to make it through the tunnels.  I, however, was not going to buy an enormous headlamp for just one more day of cycling.  And anyways, I didn’t have the confidence that even that would save my life in those death holes.

Instead, I went browsing around the second-largest town in the archipelago, asking myself what it would be like living in a place like that, with 5,000 people, a handful of shops, one church, one museum, one bookstore, and a fleet of fishing ships which constituted the primary employment for most of the male population.  Kinga says all that grows in the Faroes are rhubarb and potatoes.  And sheep.   What’s it like when that’s the place of your childhood, when that’s what you know, when Klaksvik is what normal feels like?