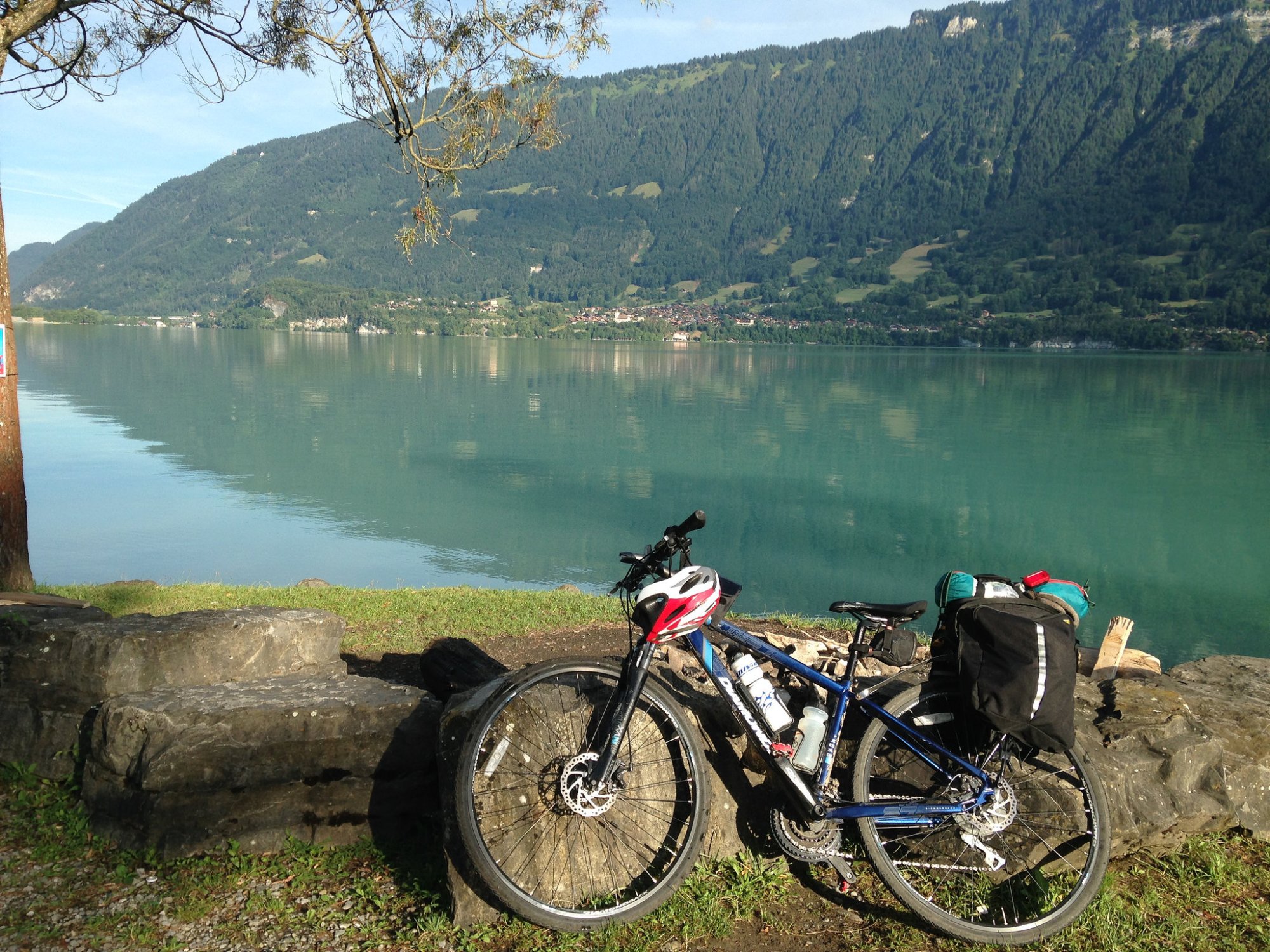 Bringing my bike to Switzerland was definitely a good idea.  I’ve been able to ride as often as I want, in some of the most beautiful countryside I’ve ever seen.  Cycling gets me out of the car and into the open air and sunshine, along less-traveled routes, close to pedestrians, small villages, shops, and farmland.  I can slowly enough to read signs and take in the scenery, think about the culture and history, and enjoy the colors around me.  And of course, there’s the luxury and speed of going downhill.  All forms of travel have their advantages, but I prefer that which enables me to test my physical boundaries.  For me, cycling is ideal.

Cycling in Switzerland offers adventurous terrain paired with cycling-friendly infrastructure on roadways and public transit.  It makes cycling possible for a wide range of people- families with children, touring cyclists with panniers, day riders, athletes and mountain bikers.  Depending on your level of skill, it’s possible to cross dramatic distances, pass through idyllic scenery, or just enjoy a short excursion.  Bike lanes on highways and bike paths with few vehicles protect cyclists from traffic, while within cities cyclists enjoy their own section of the road and separate stoplights with bicycle-shaped designs.  Hiking paths cross which through remote areas often share mountain-biking trails, and no matter where you are in Switzerland, there’s bound to be a village a few kilometers away with a public water fountain and a chance to resupply.   Buses and train stations are always within a few hours’ ride and most often even closer than that, so you can cut your trip short at any point and take public transit to your next destination.

There are 9 national cycling routes  and 55 regional routes marked throughout Switzerland.  Many of these routes overlap and all of them cross through culturally and historically significant sites.  These signs are always maroon with a white bicycle icon and communicate elevation intuitively.  If the bicycle is tilted upwards, the trail will include some elevation changes.  If it is level, then you can expect a level road.  If there is sudden, dramatic change, such as an increase in 500 meters over 5 kilometers, this may also by indicated by a small sign, but not always.   Frequently between towns you can expect some indication of distance, at a crossroads where several routes meet, you can expect a large sign with a regional map and explanations of the various routes related to that crossroads.

Bicycle maps of 22 specific regions are available through Kummerly and Frey  on water-resistant paper and come with a code for a downloadable maps for your smartphone.  I still prefer the paper versions for ease of access.   I bought a map for the southern Alsace region for my ride from Freiburg to Switzerland, and a map of the Jura region for the time I lived in Pleigne.   I used the latter much more frequently and ended up giving away the Alsace map to a co-worker.  When I cycled from Pleigne to Meiringen and also to Basel, I researched my route beforehand and then relied on road signs along the way to accompany my notes.

Learning to read the elevation indicators on the maps became much more important than judging distance when cycling with bike luggage in Switzerland, particularly in the Jura.  I also had to get used to the metric system in terms of both distance and elevation.  Having misjudged the manageability of a route, there were many times when the gradient was so steep that I had to pull over and walk the bike up the hill.  If I had read the elevation indicators more carefully, I would have chosen a different route.  I learned the hard way that 20 miles of farmland cannot be covered in the same amount of time as 20 miles in the Berner Oberland.   Generally speaking, the routes which follow streams have the lowest elevation, even through mountainous terrain.

Accommodations are a simple problem to solve because villages are so close together and wild camping is generally permitted.  Campgrounds, bed & breakfasts, guesthouses and hostels are also easy to find, so lodging is never a problem.  Even in the most remote alpine areas, there are cycling paths which pass by farms or mountain huts, or are within hiking distance of either.  The more adventurous mountain biker could plan a journey similar to the hut-to-hut hikes popular along the Via Alpina or any of the other 6 national hiking routes or the 64 regional hiking routes.

Just this last weekend I completed a three-day cycling trip which I will detail in an upcoming post, and for the first time traveled with a tent in addition to my bike luggage, wild camping one night and using a proper campsite on the following evening.  Although the conveniences of the latter had their advantages, I preferred the independence and quiet of the former, and look forward to more multi-day cycling trips when I’m back home in Alaska.