Sometimes the best way to do it is to do it.
— Amelia Earhart.

I rode my bike from Pleigne to Basel on Saturday.  It was early and cool and I dropped 409 meters of elevation in eight minutes flat.  It took longer to get back home.
I used to ride my bike to work in Oklahoma.  Every day, 8 miles, in about 30-35 minutes.  It was mostly flat with a few slight rises, and I could do a 3:45 mile or better most of the way.  I rode through the neighborhoods of Norman, past the university, across highway 9, and headed south into Noble.  There was no shoulder after leaving Norman city limits and the cars were never accustomed to cyclists.  I rode through town or left at 6am to avoid the school buses.   I wheeled my bike into my classroom,  changed clothes in the staff room, and began preparations for class.  Eight hours later, I’d change clothes again and ride home.  If it had been a particularly trying afternoon, I’d stretch out the ride and take the country roads, past my usual turn and head towards Oklahoma City, across highway 35, and then curve back around the southwest end of town.  The long afternoon rides took out the sting and the stress of the classroom and replaced them with wind and color, prairie and pasture.  I’d stop and photograph winding roads, sunset-colored cloudscapes and snow-on-the-mountain. 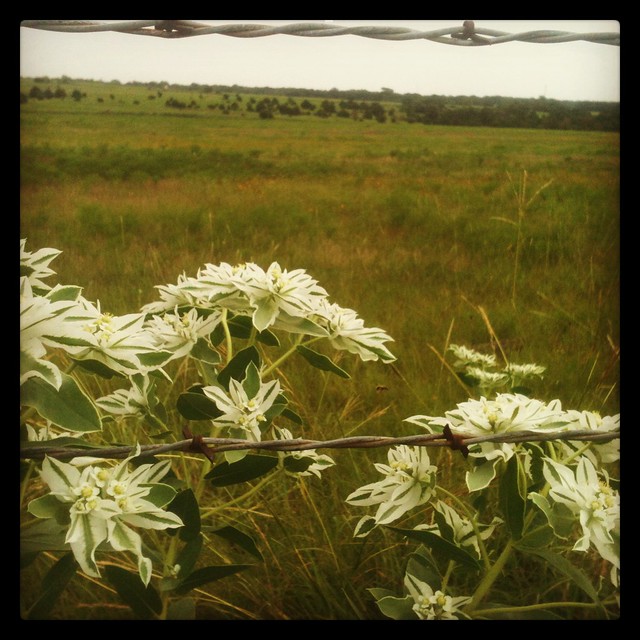 Opportunity doesn’t always knock.  Sometimes you have to go after it with a club.
—  Jack London.

I drank in beauty like water in that dry and dusty land, shook its pockets empty and came up wanting.  Red Dirt Land.  Woody Guthrie and love-me-some-Okemah music festivals and John Fullbright  howling out the folksong social movement.  Tailgate parties for Sooner football when the whole town turns out to watch the game and people sell parking places on their front lawns.   This Land Press, turning a glaring, artsy eye on Oklahoma histories and selling them bimonthly in every hipster coffee shop.  Tulsa Race Riots of 1921 and the anger and the shame.  Route 66 and it’s nine hours to New Mexico, highway 35 and it’s two hours to Texas, five to Arkansas and nobody goes to Kansas.   Indian casinos on every border and tribal pride printed on a license plate.  Caddo.  Cherokee.  Kiowa.   All-black towns which persist to this day.  Poverty and meth labs and do-nothing, go nowhere futures, my sophomores high and smiling.   Back in the 907 and it’s the Phoenix in Tulsa, studded with paperback spines in the walls, a library in the back, a wine bar, a coffee house.  Art and music and poetry slams, story slams, entrepreneurs and new businesses.  Grandmothers with a soft drawl and soft white aprons.  Old men in overalls and coveralls drinking endless cups of coffee in the diner.  Fried pies on the way to Texas and we stopped every time.  Oil under the fingernails of men in fancy suits.   Drought takes the water and fracking takes the water and the earthquakes come and still it’s oilandgas, more oilandgas.  And I’m back in the 405 and it’s campus and Grey Owl Coffee and the Great Reading Room and Kaufman Hall and my professors’ names on their doors and their jokes taped to their doors and their office hours and their recommendations and as many possible futures as branches on a tree that branch into stems that stem into twigs that disappear into the air and I’m still hurtling towards infinity.  Will I be a linguist, will I be a teacher, will I be a professor not like you.  And it’s back to the coffee house and the drawing board and how will I ever get out.  Stretches of wild prairie that go on forever.   I quarried that state, strip-mined it, hunted down the echoes of the traces of beauty in that red dirt land.
So now I’m playing the chandler.  I biked to Basel on Saturday.  I call Alaska home.  I’m looking at Denmark and wondering what it will feel like to ride across it and bewilder myself with names unpronounceable and a language I don’t know.  To step onto a ship and drift north by northwest.  I want to be prepared.  I’m off the map on the inside and I’m not sure what’s coming up ahead.
Advertisement

One thought on “Playing the Chandler”