A ship is safe in harbor,

but that’s not what ships are for.

When you visit people you haven’t seen in eight years and they treat you like family should, you know you have good friends.  The morning after I arrived, I woke early to a still house and laid in bed a long time just looking out the window and listening to the birds.   Outside, a forty-five degree slope of green grass rose up and cut a swath in the landscape.  In the far background across the valley, farmhouses dotted the opposite slope, each of which had once a few cows or goats under the  care of the household, according to how the village divided up the plots of available land.   This time of year the animals which remain on these slopes are all up on the alp, out of sight, where they remain for three months with their caretakers.

I went outside, and took in the soft morning light coming over the ridges to the northeast.  My clothes, hanging on the line, were still damp from washing the night before, and I set them in the dryer.  I had set them on the line to save electricity, but in the 50 degree night air, they were as wet as they had been after I had washed them last night.  I walked around the house and looked a the plants and found alpine strawberries growing in the garden.

While the children were still all in bed, we breakfasted early together with bread, jam, coffee and milk.  We discussed my journey, and the time they had spent traveling through the United States.   The littlest one, a son born just last week, stirred in the next room.   Two of the younger children trotted down the stairs and joined us, staring at me with wide blue eyes as their mother prepared a piece of bread with honey.  My friend read in Hochdeutsch from the Bible, his voice careful to pronounce the words with precision.  Then he took out a thin paperbound book entitled “Zeit mit Gott” and read a brief devotional paragraph to accompany the passage. Then he set both books aside and prayed aloud for me in Bärndüütsch, the words rolling through the air like water over stones.  “Wir danken Dir, Vater, dass Sasha uns besucht.”

We sat a little while longer together, just talking.  I was reluctant to leave, but determined to cover as much ground as possible before resorting to the train system.   The evening before, I had said to my friend, “In Switzerland, everything is up!” to which he answered, “Yes, but when you’re at the top, everything is down!”  and he grinned.  This morning, he assured me, “Mit dem Auto komme ich zu Bern in keiner Stunde.  Von hier aus ist es alles bergab.  Ich verspreche, es ist nicht steil.  Bern erreichst du sicher heute.”

Packed and ready to go, I gave all the children hugs, as well as my friends, and they wished me well as I set off down the steep path leading from their house to the street below, where my bike was stored in a covered carport.  I looked up one last time, and they waved from the window. 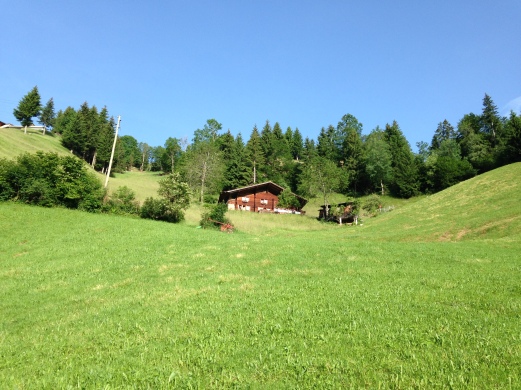 I left Adelboden at 8:00 and by 11:30 I was in Bern, having covered 48.62 miles.  It really was downhill all the way to Thun, and then as the Mittelland stretched out in endless fields of corn and chard, the rough places became plain.  I wish I had had a helmet-mounted camera for the ride from Adelboden to Frutigen.  If I hadn’t been using my brakes, I would have been going 40 miles an hour, easily, whipping around curves.  As it was, I pressed my disc brakes down for three or four miles, avoiding cars and letting the wind whoosh past my face and through my hair.  It was cool in the upper mountains, 3500 feet above sea level, and the air had a delicious woodsy scent on the breeze.

I was traveling around 20 miles an hour until I got to Thun, and then as the agricultural area spread out before me, gardens and cultivated fields, I slowed down a bit.  In a small suburb of Bern, I stopped for a warm meal, and the continued on another 27.60 miles to Solothurn, and a little ways beyond, to a small village called Wangen an der Aare.  It wasn’t the most efficient route, and I stopped to take the train to Freiburg from Wangen because I just couldn’t go anymore.  The map below is a rough estimate, but by my calculations I traveled 86.22 miles  (138.9 km) in almost seven hours (6:57 travelling time).  That definitely broke a record for me.

There was a little confusion and stress on the train between Olten and Basel Bad Bahnhof, since I had locked my bike in the bike compartment when it was empty, and then about sixteen other cyclists loaded their bikes on board between Olten and Basel.  It was funny at first, but I admit, I was getting a little concerned that I wouldn’t be able to get my bike out when we reached the station, especially considering my fiasco in Luzern. 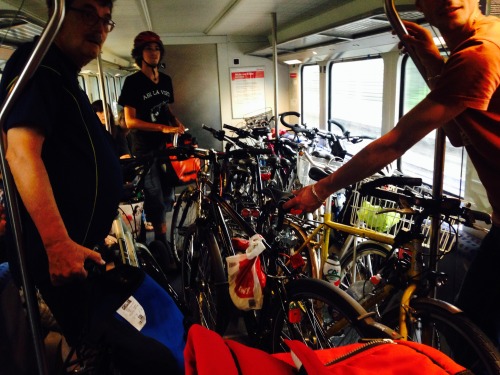 However, the train stopped for a full ten minutes in the Basel station, and I arrived in the Freiburg Hauptbahnhof at 8:00 as planned.  After a fifteen minute walk, I found the place where I would be staying for the next two weeks.

It felt dizzyingly relieving to get my key, check in to my room, take a shower and just collapse in a nice soft bed.  My bike was locked up downstairs, and I didn’t have to share the room with a suitemate.  Perfect.